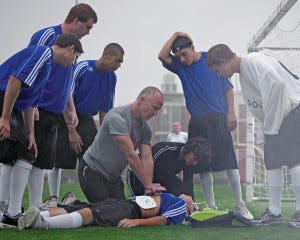 Is your team prepared?

Coaches spend countless hours preparing student athletes for competition, but how about training them to save a life? Studies show between 6,000 - 8,000 teens experience sudden cardiac arrest (SCA) annually;1 of those affected, only 1 in 10 will survive.2

Student athletes are at heightened risk for SCA due to the additional strain placed on the heart during athletic conditioning and competition. Contributing factors include the influx of adrenaline, dehydration, fever, and changes in electrolytes.3

An SCA victim’s best chance of survival depends on having an automated external defibrillator (AED) close at hand. Nine out of ten victims who receive a shock from an AED within the first minute’s survive.4 Ensuring that your students and coaches are trained to respond to an SCA emergency could help save a life.

SCA can strike without warning, but sometimes symptoms are presented.

Train your student athletes to know the warning signs:5


Watch this video to learn the story of a high school volleyball player whose life was saved when volunteers took action.

Having AEDs readily accessible throughout your school’s campus will help ensure that you are prepared to respond to an SCA emergency, whether it happens on the field, in the gym, or in the cafeteria.

To learn more about how the ZOLL AED Plus can help prepare your school for an SCA emergency click here.

Sudden cardiac arrest affects nearly 10,000 youth nationally per year according to the American Heart Association, while the National Center for Catastrophic Sport Injury Research reports that more student athletes die annually from sudden cardiac arrest than from sport-related trauma. As a result, more and more states are enacting AED legislation.

Joining several other states that have enacted some form of AED legislation pertaining to schools, California has established new requirements for public and charter schools that offer interscholastic athletic programs.

Sudden cardiac arrest causes more than 350,000 deaths every year, and while it is largely an issue for older adults, the syndrome is also among the leading causes of death among young athletes.

Rapid treatment of SCA with an AED can be lifesaving. An AED analyzes the heart rhythm and then sends an electric shock to the heart to try to restore its normal rhythm.

Every minute that defibrillation is delayed, the likelihood of survival from SCA drops about 10 percent. If bystanders act quickly and use an AED (in conjunction with CPR), the survival rate is 89 percent among student-athletes suffering SCA on a school campus.

According to the bill’s author, Assemblyman Brian Maienschein -San Diego, 42 young athletes in California died while engaged in physical activity between 2009 and 2011, and among those cases where a cause of death was released, 68 percent were attributed to sudden cardiac arrest.

“Although SCA can occur at any time, vigorous exercise appears to act as a trigger, making SCA more common during athletic practices and games,” Maienschein said in a statement. “SCA is the leading cause of death in athletes during exercise and usually results from intrinsic cardiac conditions that are triggered by vigorous exercise.”

“If automated external defibrillators are more readily available for authorized personnel to use, the lives of more student athletes and spectators will be saved,” he said.

He adds that while almost every coach in California has been trained to use the AED, only about 75 percent of high schools have the machines. The chances of survival are close to 90 percent if a deliberator is used within the first minute of collapse. After that, chances of surviving rapidly decline.

The American Heart Association already has a recommended protocol for schools to create a cardiac emergency response plan:

Full text of the Bill can be found here.

School Health can help you decide what supplies you need to prepare your school for emergency situations. Visit our California AED Legislation Page for more information.